Conservation in the Aammiq Wetland 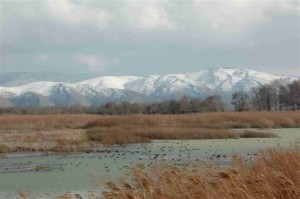 The Aammiq Wetland is the largest remaining freshwater wetland in Lebanon, a remnant of much more extensive marshes and lakes that once existed in the Bekaa Valley. It has been designated an Important Bird Area in the Middle East (Birdlife International, 1994), is included in the Directory of Wetlands in the Middle East (IUCN, 1995), was declared Ramsar site number 978 in 1999, and most recently (2005) was designated with Al Shouf Cedar reserve a “Man and Biosphere Reserve” by UNESCO. It lies on one of the most important bird migration routes in the world, and over 250 species of birds have been recorded in the area, including the globally vulnerable Great Spotted Eagle Aquila clanga, Imperial Eagle Aquila heliaca, and Lesser Kestrel Falco naumanni. Records of globally near-threatened bird species at the wetland include Great Snipe Gallinago media, Ferruginous Duck Aythya nyroca and Pallid Harrier Circus macrourus.

The wetland lies 7 km SSW of the small town of Qab Elias (about 10 km south of the Damascus Highway) on the western edge of Mount Lebanon. The main area of reedbeds and open pools covers 253 ha, stretching east from the foot of the mountains to the Litani River in a long strip. Rain and snow falling on the high ridge of Jebel Barouk to the west provide water for the wetland. Most rain falls between December and March, soaking quickly through layers of limestone in the mountains and emerging as springs in the valley floor. The water is particularly pure, as it has not been polluted by agricultural fertilizers, pesticides, etc. Until A Rocha’s involvement the marsh dried out by mid-July (with the exception of a few deep pools and ditches) and did not fill up again until January or February. However, the introduction of improved management techniques, such as the reduced pumping of water for irrigation of nearby farmland, and changes to less “thirsty” crops, has helped the marsh remain wet throughout the year. This has resulted in a significant increase in wintering and breeding water birds since 2002.

Surrounding the open water and reed bed are areas of rough grazing, cultivated land, drainage ditches, and an avenue of trees, all adding to the diversity of habitats in the area. On the nearby mountain slopes, small wooded areas and rocky shrubland give an even greater variety of habitats and species. Behind the nearby village of Aammiq are woods where Syrian Woodpecker Dendrocopus syriacus and Syrian Serin Serinus syriacus can be found. In spring and summer, shrubby hillsides are home to assorted buntings, wheatears, warblers and shrikes, and rocky gorges host Rock Nuthatch Sitta neumayer and Eagle Owl Bubo bubo. Mammals present include Persian Squirrel, Wildcat, Wild Boar and the elusive Porcupine.